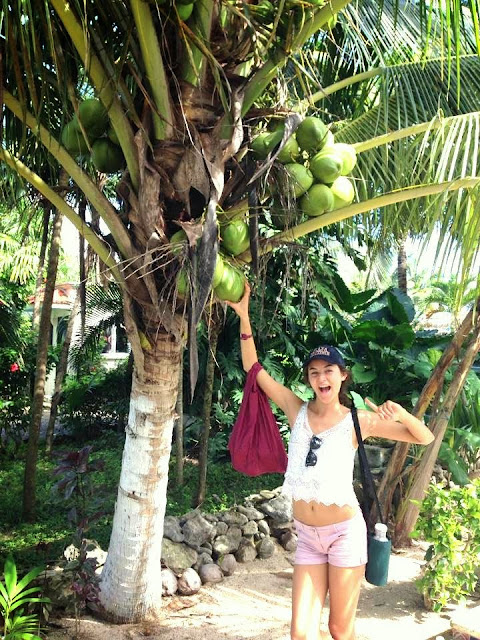 Posted by Hershel Parker at 5:57 PM No comments: Links to this post

Peter Wood--Richard Brodhead and the "Wretched Defense of the Humanities"

The Commission was co-chaired by Richard Brodhead and John Rowe.  Rowe is the retired chairman of Exelon Corporation, who has contributed a lot of time, attention, and money to promoting charter schools.   Brodhead is the president of Duke University and I suppose such an established figure that, at least in the eyes of the American Academy of Arts and Sciences, he has lived down his infamous behavior during the Duke lacrosse affair.  Perhaps in polite company that shouldn't be mentioned, but I confess I was astonished to see him put forward as the primary academic figure behind this report.  If we are to make the case for the humanities as the ennobling part of higher education, might it be better to do so under the symbolic leadership of someone who has modeled courage, temperance, and faithfulness to the actual ideals of disinterested judgment?


An Excerpt from A Reader's Book of Days: True Tales From the Lives and Works of Writers for Every Day of the Year by Tom Nissley
Tom Nissley has gathered an impressive potpourri of 2000 stories, anecdotes, and commentaries from writers for each day of the year. Here is an excerpt on wonder.
"Not every story cares about the calendar, of course. Do you ever know what day — or even month — it is in one of Kafka's novels? Time there is both too urgent and too infinite for the mere particularity of dates. Time has a different character in Virginia Woolf's novels too. Mrs. Dalloway, like Ulysses, is set on a single day in the middle of June, but she never says which one, leaving us no Dallowayday to celebrate the way we do Joyce's June 16, 1904. In fiction, her sense of time had less to do with what day it was than with, as Mrs. Dalloway's working title put it, The Hours, or, as she named one of her essays, 'The Moment.'
"But outside their fiction, Kafka and Woolf were two of the great artists of daily life — Kafka in his diary and especially his letters to his eternal fiancee Felice Bauer, and Woolf in her letters and especially her incomparable diary. They are among those writers whose daily impromptu autobiographies, like the diaries of Pepys, Thoreau, and Victor Klemperer or the letters of Flannery O'Connor or the James family, have become literature too. Then there are those who have the everyday art of their lives recorded by others: Dr. Johnson by his Boswell, of course, but also Herman Melville, who was no diarist but whose days appear again and again in these pages thanks to the blessed obsessiveness of biographers like Jay Leyda and Hershel Parker, and literary characters like Zora Neale Hurston and Jack Kerouac, whose self-creation made their days lastingly vivid.
"Now you know how I read to make this book. How should you read it? If you're like me, you'll look up your birthday first. Some readers will simply open it at random, or seek out favorite names in the index, or read a single page on its appointed day before moving on to the next one, or even sit down and read it straight through. Most of all, I hope you will get detoured from this book to start opening some of the other books it's made of. That's what I'm going to do now that I've finished writing it."


I am going to find a picture of Leyda and Parker to post here. How I revered that man! 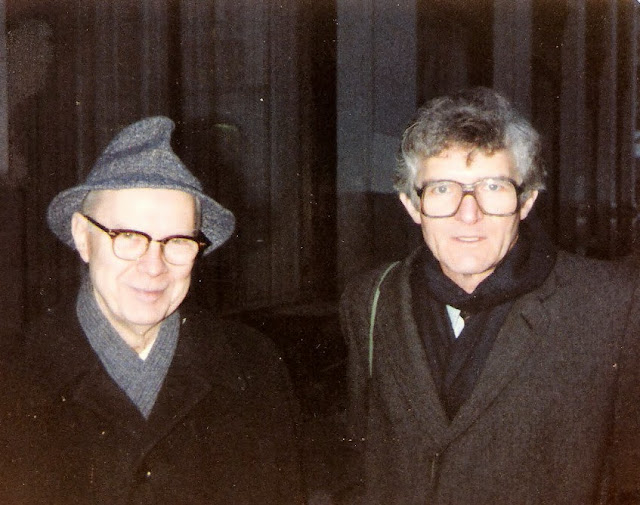 Posted by Hershel Parker at 8:51 AM No comments: Links to this post 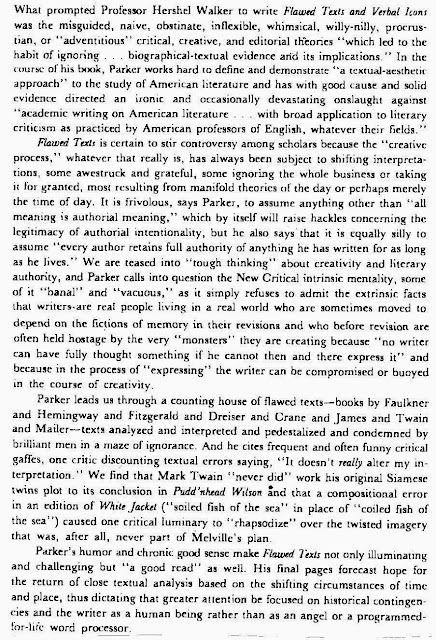 William C. Hamlin's review in the Winter 1985 MODERN FICTION STUDIES
Posted by Hershel Parker at 8:44 AM No comments: Links to this post

Lamar State College of Technology in the late 1950s--Dave Oliphant's HARBINGERS OF BOOKS TO COME, p. 21 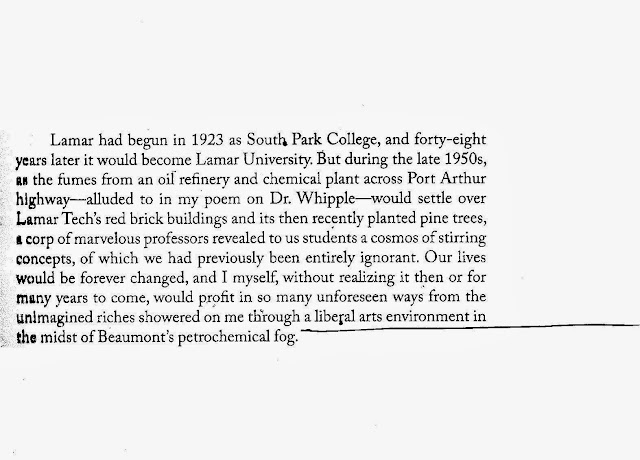 From September 1957 through August 1959 I worked 8 at night to 4 in the morning in the Freight Office of the Kansas City Southern Railroad in Port Arthur and commuted to Lamar. Oliphant and I had some of the same teachers but not the same classes.

When I read this paragraph aloud to the resident philosopher she said, "You don't say much about the teachers at Lamar and all you say about the teachers at Northwestern is that they were terrible. The only teachers you praise were at West Contra Costa Junior College." Well, that's pretty much true. At WCCJrC Mark Eccles was a great art history teacher and Charles Lovy was a world-class language teacher.

Oliphant seems to remember everything. I remember 22 units one semester and prolonged sleep deprivation. I never had the interaction with professors that Oliphant had as a regular student and confident guy. I was a commuting student and hopelessly shy. But I find his depictions of teachers absolutely fascinating
Posted by Hershel Parker at 3:13 PM No comments: Links to this post

When smart people list the main characters of Norman Mailer’s AN AMERICAN DREAM and don’t come up with the same names, what’s wrong? Are the best critics incompetent? No.

It’s simple. In the book version of AN AMERICAN DREAM you can’t tell who the main characters are because, having carefully designed a hierarchy of characters in the Esquire serialization, Mailer by a couple of small cuts removed the passages which made clear when Rojack was confronting equals and when he was confronting inferiors. I laid this out in the BULLETIN OF RESEARCH IN THE HUMANITIES (Winter 1981), with illustrations from Mailer’s paste-up of the serial text—in a Woolworth ledger I was allowed to carry off from the Vault for a few months. I refined it slightly in the 1984 FLAWED TEXTS AND VERBAL ICONS. I remember the chapter version especially well because it took me all one day to type it perfectly and it was the last long piece I ever put on a typewriter. Critics find it hard to believe that writers can damage books by cutting or adding or rearranging a few dozen words. So do biographers. Here is part of a footnote in the 2013 NORMAN MAILER: A DOUBLE LIFE, by J. Michael Lennon (p. 832):

NM’s chronology problem is carefully examined in Hershel Parker’s “Mailer’s Revision of An American Dream” . . . . He argues strenuously that the assassination “wrecked” the novel’s time scheme, but few have even noticed the problem.

Yes, but the greater damage was to the hierarchy of characters.  When good critics make wildly different lists of the main characters in a novel, maybe something is wrong with the novel. And in this instance, Mailer had it right in the serial version.

I have a note by Mailer on a ridiculous suck-up newspaper article headed “MAILER BATTLES ACADEMIC CHUTZPAH”--by a journalist who, as I said in FT&VI, like Mailer’s Romeo had “more pressure in his eyes than ideas: “To Hershel—may his ideas prevail to the sticking point, Norman.”

Now, there’s a man who can pull his own AN AMERICAN DREAM and MACBETH together spontaneously!  Sooner or later, my ideas will prevail to the sticking point: don’t critics want to agree on who the main characters in a book really are? I can wait.

Posted by Hershel Parker at 7:41 AM No comments: Links to this post